The community, located at 1850 Thibodo Road, is a stone’s throw from a wide range of retailers and the entrance to California Route 78. Sofi Shadowridge contains one-, two- and three-bedroom apartments, with floorplans between 669 and 1,432 square feet. The property’s amenity mix includes a business center, a movie theater, a game room and a recycling center. In February, the asset was 94.3 percent occupied.

Located at 8798 Spectrum Center Blvd., the property is situated near both the Cabrillo and Escondido freeways, 9 miles north of downtown San Diego. Domain offers studio apartments, as well as one- and two-bedroom units, with floorplans up to 1,309 square feet. The pet-friendly community’s amenities include a swimming pool, a barbecue area, a fitness center and approximately 750 parking spaces.

In February, Raintree Partners paid LaSalle Investment Management $141.5 million for Regents La Jolla, a high-end, 333-unit community in the metro’s University submarket. Pacific Life Insurance Co. provided $87.5 million in acquisition financing to the buyer. The seller took ownership of the asset in 2007 in a $106.5 million deal with Montecito Property Co. In addition to the 333 rental units, the property contains 241 individually owned condominium units, which were not included in the transaction.

Located just east of the University of California San Diego’s campus, the property is close to a wide variety of shopping, dining and hospitality properties. More than 3 million square feet of office space is within a half a mile of the community 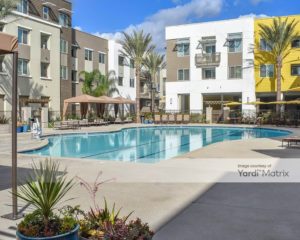 Tied as the second largest transaction over the past 12 months, MG Properties Group’s $141.5 million acquisition of the newly completed, 416-unit MARC San Marcos closed in October. CBRE Capital Markets originated $83.1 million in financing through Freddie Mac to finance the deal. The seller, a joint venture between Intracorp and Resmark Equity Partners, finished work on the property in February 2018, following more than two years of construction work.

Located at 1045 Armorlite Drive in San Marcos, the community contains a mix of studio, one-, two- and three-bedroom apartments, as well as 64 two-bedroom townhome units. Floorplans range from 650 to 1,250 square feet. Amenities include two swimming pools, a conference center, a pet spa and complimentary Wi-Fi throughout all common areas. Additionally, more than 15,000 square feet of retail space is at the ground floor of the building.

The metro’s largest multifamily deal in the last year took place in the La Mesa submarket in August. TruAmerica Multifamily, in partnership with Intercontinental Real Estate, paid $149.5 million for two adjacent Class B communities from Fairfield Residential. Following the sale, the assets were merged into one 527-unit property, rebranded as Alterra & Pravada.

The community is located at 8727 Fletcher Parkway, near the Sharp Grossmont Hospital and the nearly 1 million-square-foot Grossmont Center. Downtown San Diego is less than 15 miles away, accessible via Interstate 8. Apartments range from one- to two-bedroom floorplans, each containing between 616 and 1,275 square feet. As of February, the property was 97.2 percent occupied.